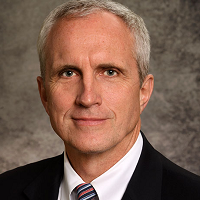 Dr. William Jordan is the current chief of the Division of Vascular Surgery at Emory University School of Medicine. Upon completing his vascular surgery fellowship at Emory in 1994, where he also obtained his MD, Dr. Jordan returned to the site of his general surgery residency, the University of Alabama at Birmingham. He was appointed a chief of vascular surgery at UAB in 1996, program director of the vascular surgery fellowship in 2002, and the Holt A. McDowell, Jr., Professor and Director of Vascular Surgery and Endovascular Therapy in 2007.

He also initiated an integrated vascular residency in 2010. He returned to Emory in 2016 to direct the division of vascular surgery and endovascular therapy. His clinical and research interests encompass the minimally invasive treatment of aortic diseases, carotid artery diseases, and peripheral vascular diseases. Dr. Jordan's extensive involvement in clinical research includes a well-funded research portfolio.