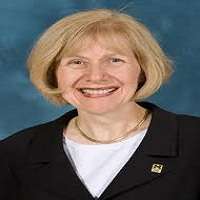 Dr. Feldman received her M.D. and Ph.D. degrees from the University of Michigan (U-M), completed a neurology residency at the Johns Hopkins Hospital and returned to U-M for a Neuromuscular fellowship. In addition to her active clinical practice in neurology and position as the Russell N. DeJong Professor of Neurology at the U-M Medical School, Dr. Feldman is Director of the A. Alfred Taubman Medical Research Institute, and is Director of Research for the U-M ALS clinic.

She also runs her own 30-scientist laboratory, the Program for Neurology Research & Discovery, and is the principal investigator of two first-ever FDA approved human clinical trials of intraspinal stem cell implantation therapy for ALS. Dr. Feldman has published more than 350 original peer-reviewed articles, 60 book chapters and three books and has had continuous funding from the National Institutes of Health for more than 20 years.

She is Past President of the Peripheral Nerve Society and served as President of the American Neurological Association from 2011 to 2013, the third woman to hold this position in 130 years. Among Dr. Feldman’s greatest accomplishments is her training of both scientists and neurologists. Nine scientists have received their Ph.D. degrees under her supervision. She has trained 40 postdoctoral fellows in her laboratory to become neuroscientists, and 50 neurology fellows have trained under her to specialize in the treatment of neuromuscular and neurodegenerative diseases, with an emphasis on ALS and neuropathy.

In March of 2016, Dr. Feldman was honored as one of America’s Top Doctors, earning one of only three Clinical Excellence Awards at the 11th Annual National Physician of the Year Awards in New York. In June 2016 she was named among the 100 Most Influential Women in Michigan by Crain’s Detroit Business. In addition, she has received both the Early and Distinguished Career Development Awards from the U-M, a lifetime achievement award from the American Diabetes Association and was elected into both the Johns Hopkins Society of Scholars and the National Academy of Medicine.