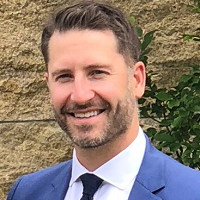 W. Christopher Fox, MD, graduated from the University of Michigan with a B.A. in anthropology-zoology in 1998 and the UM College of Medicine in 2003 and completed the UM neurological surgery residency program in 2010. In 2008 he completed a one-year endovascular fellowship at the University of Florida. From 2010-2013 he was a staff neurosurgeon at the Naval Medical Center in San Diego and from 2013-2015, he was an assistant professor at Columbia University. In September 2015, Dr. Fox joined the faculty of the UF department of neurosurgery as an associate professor.

Along the way, Dr. Fox has accumulated many honors. These include a full athletic scholarship to the University of Michigan, where he was a varsity hockey player on a team that won two national championships and he played professional hockey from 1998-1999. He received the Edgar Kahn Award for research in the UM Department of neurosurgery, the Aerospace Medical Association National Young Investigator Award and the Michigan Association of Neurosurgeons Resident Award for Clinical Research.

Dr. Fox is the author of multiple peer-reviewed papers and book chapters. He has made many presentations at national and international meetings. He joins the UF Health cerebrovascular program, which has a total of six faculty at two UF Health campuses in Gainesville and Orlando.