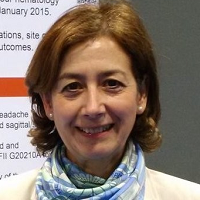 Dr. DeSancho received her MD from the Autonomous University in Spain in 1983. Following a residency in Family Practice at La Paz Hospital in Spain and a Residency in Internal Medicine at Metropolitan Hospital Center in New York, she completed fellowships in Hematology at Montefiore Medical Center from 1991-1992 and the Mount Sinai Medical Center from 1992-1993. Following this, she completed three additional fellowships at Mount Sinai in Transfusion Medicine, Medical Oncology, and Bone Marrow Transplantation.

She obtained a faculty position at Columbia University as Assistant Professor of Clinical Medicine from 1997-2000, and in 2000 was appointed as Assistant Professor of Medicine and Assistant Attending Physician at Mount Sinai. Dr. DeSancho joined Weill Cornell Medical College in 2006 and is an Associate Professor of Clinical Medicine at the college and Associate Attending Physician at the New York-Presbyterian Hospital. She serves as Service Chief of the Division's Benign Hematology Service, has developed a successful clinical research program in Benign Hematology, and conducts clinical trials in Benign Hematology.

As a researcher, Dr. DeSancho's interest is in thrombosis and hemostasis, specifically thrombophilic disorders and women's health issues. She has participated in a number of important clinical studies. She has been Principal Investigator on many studies, including a Phase II multicenter trial of low molecular weight heparin for patients requiring bridging of anticoagulant therapy, a trial of cancer-associated thrombosis, and studies on thromboembolism in women's health. She is currently the principal investigator in a clinical trial for secondary prevention of venous thrombosis and in a clinical trial using plasma-derived antithrombin in patients with hereditary antithrombin deficiency.