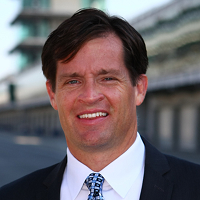 J. Douglas Boles was named the president of the Indianapolis Motor Speedway Corporation in June 2013. He is responsible for the daily operations of the Indianapolis Motor Speedway and all four world-class racing events at the facility – the Indianapolis 500 presented by PennGrade Motor Oil, the Indycar Grand Prix, the Brickyard 400, and the Red Bull Air Race. He also is responsible for exploring and expanding business opportunities for the Speedway. In 2017, IMS hosted more than 275 event days of activity, including the newly created Lights at the Brickyard holiday experience that started in 2016.

Boles served as a chief operating officer of the Indianapolis Motor Speedway from January-June 2013 along with his role as vice president of communications for Hulman & Company, which he assumed in November 2011. Boles joined the company in November 2010 as IMS director of public relations after more than 15 years of executive-level motorsports experience in team operations, marketing, sponsorship, and public relations. A Butler University graduate who also earned a law degree from the Indiana University School of Law at Indianapolis, Boles served as executive vice president of the marketing and advertising agency ignition, Inc., from 2006-08. He then became a partner in the marketing agency i3Worldwide while conducting his own private law practice, primarily representing drivers, race teams and sponsors.