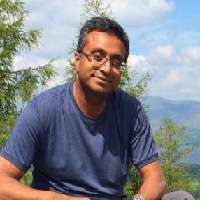 Ganesh Suntharalingam is a consultant intensivist and anaesthetist in London. From 2007 to 2014 he was clinical director of a large combined critical care and operating theatres department from 2007 to 2014, during which he learned more about operating room safety, consensus-building between surgery and anaesthesia, and heavy-duty hospital construction than any intensivist should really have to. He was clinical lead for the North West London Critical Care Network from 2003 to 2017, leading the development of a voluntary collaboration of 13 ICUs covering a population of 1.5 million adults with a shared approach to clinical process, decision-making, and critical care benchmarking.

In March 2006 he was thrust blinking onto the world stage during the TGN1412 incident as the lead clinician in the NHS rescue of six injured volunteers from a first-in-human drug trial at a commercial trial centre. His main claim to fame was displacing Saddam Hussein and Tony Blair from the CNN evening news bulletins - as a colleague recently pointed out, he is the only one of these to still have his job.

He is currently the programme director for State of the Art, the UK's principle annual critical care conference, and is Honorary Secretary of the Intensive Care Society. He will be President-Elect of the Society in 2018 and looks forward to building ever stronger links between Canadian and UK critical care.