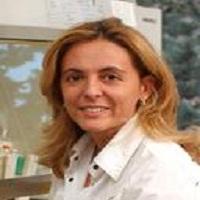 Dr. Federica Sallusto received the degree of Doctor in Biology from the University of Rome and performed postdoctoral training at the Istituto Superiore di Sanita in Rome working on T cell response to allergens and at the Basel Institute for Immunology in the laboratory of Antonio Lanzavecchia on human monocyte-derived dendritic cells. In 1997 she became member of the Basel Institute and since 2000 she is group leader at the IRB. Her studies in the human system revealed a differential expression of chemokine receptors in Th1 and Th2 cells and led to the characterization of “central memory” and “effector memory” T cells as memory subsets with distinct migratory capacity and effector function. Among her recent contributions are the discovery of Th22 cells, the identification of markers to identify human Th17 cells and the characterization of two distinct types of pathogen-specific Th17 cells that produce IFN-g or IL-10. Studies in the mouse model challenged current dogmas as to the mechanisms that control lymphocyte migration in lymph nodes and in the central nervous system; more recently her lab showed that persistent antigen and germinal centre B cells sustain Tfh cell responses and phenotype. For her scientific achievements, Federica Sallusto received the Pharmacia Allergy Research Foundation Award in 1999, the Behring Lecture Prize in 2009, and the Science Award from the Foundation for Studies of Neurodegenerative Diseases in 2010. She was elected member of the German Academy of Science Leopoldina in 2009 and member of EMBO in 2011. She is President of the Swiss Society for Allergology and Immunology for the period 2013-2015.