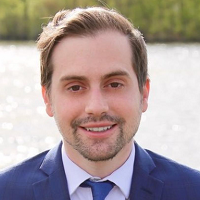 David LeBoeuf is a lifelong Worcester resident and proud graduate of the Worcester Public Schools. He attended Heard Street Discovery Academy and Sullivan Middle School before moving on to South High where he was Class President and Valedictorian. David began his higher education journey at Clark University before transferring to Harvard College, where he was one of only 13 transfer applicants accepted internationally. He graduated with a degree in Social Studies (Community Engagement and Urban Social Change).

David worked his way through college and began his career as an interim staff assistant in the Worcester City Manager’s Office. In 2011, he was appointed as the Director of the Initiative for Engaged Citizenship (IEC), a coalition of community-based organizations focused on increasing civic participation in local elections and advocating for election modernization. Some of David’s accomplishments during his tenure include organizing Central MA Organizations to support the Election Modernization Bill and the coordination of over a dozen candidate forums.