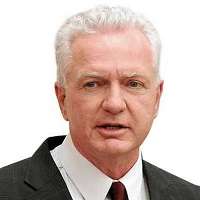 ADM Brett P. Giroir, M.D., was sworn in as Assistant Secretary for Health at the U.S. Department of Health and Human Services (HHS) on February 15, 2018. The Assistant Secretary for Health leads development of HHS-wide public health policy recommendations, oversees 11 core public health offices — including the Office of the Surgeon General and the U.S. Public Health Service Commissioned Corps, which has approximately 6,500 uniformed health officers who serve in nearly 600 locations around the world to promote, protect and advance the health and safety of our nation and our world. He also oversees three Presidential and 11 Secretarial advisory committees. Dr. Giroir is a physician, scientist and innovator. He is a former medical school executive and biotech startup CEO, and has served in a number of leadership positions in the federal government as well as academia.

In addition, Dr. Giroir serves as Senior Advisor to the Secretary for Opioid Policy. In this capacity, he is responsible for coordinating HHS’s efforts across the Administration to fight America’s opioid crisis. From 2014-2015, Dr. Giroir chaired the Veteran’s Choice Act Blue Ribbon Panel to reform the U.S. Veterans Health System. During the Ebola emergency, he directed the Texas Task Force on Infectious and Disease Preparedness Response. He was executive vice president and CEO of Texas A&M’s Health Science Center from 2013-2015, having earlier served as vice chancellor of strategic initiatives (2011-2013) and vice chancellor for research (2008-2011) for the entire Texas A&M University system. A pediatric critical care physician and a former member of the American Board of Pediatrics, Dr. Giroir cared for critically ill children for 14 years, and was the first chief medical officer of Children's Medical Center of Dallas (now Children's Health). He was also a professor at the University of Texas Southwestern Medical Center from 1993-2003, and held a number of positions in academic and hospital leadership.

Dr. Giroir has had a significant federal portfolio. He directed the Defense Sciences Office of the Defense Advanced Research Projects Agency (DARPA) from 2006-2008. In this capacity, he worked regularly with the White House, Congress, and NIH, CDC, DHS and CIA leadership on national priorities, strategies and programs. He joined the office in 2004 as deputy director, and between1998 and 2004, was a member of the Defense Sciences Research Council.