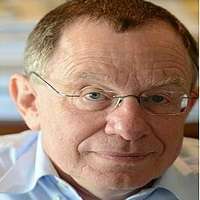 Rafael Beyar, MD, DSc, MPH, and Professor of Medicine and Biomedical Engineering,was the director of Rambam Health Care Campus, from 2016 to February, 2019. Beyar received his MD from Tel Aviv University (1977), a DSc from the Technion (1983), and his MPH from the Bloomberg School of Public Health (2008). He trained at Johns Hopkins Cardiology and has held a visiting Professor appointment there. Beyar served as Dean of the Technion’s Ruth & Bruce Rappaport Faculty of Medicine (1999–2005); under his leadership, Professors Avram Hershko and Aaron Ciechanover were awarded the Nobel Prize in Chemistry in 2004. An interventional cardiologist with research focusing on cardiovascular engineering, development of stents, and the first robotic coronary catheterization system, Beyar has authored numerous publications, several patents, 15 books, and is a recipient of several awards.

Beyar successfully led the hospital staff through the 2006 Second Lebanon War, during which the hospital was under fire. Following the war, Beyar led the hospital through a massive development plan with a vision that emphasizes the intertwining of superb medical care with education, research, and innovation. He led the administration in building a new campus with a 2,000-bed fortified underground emergency hospital, a modern children’s hospital, an advanced oncology center and an interdisciplinary heart hospital. The Health Discovery Tower, at the center of the campus, is a joint project with the University of Haifa and the Technion—integrating clinical, academic, and industry activities. Beyar also spearheaded the founding of Rambam MedTech, the hospital’s technology transfer company and has led the hospital towards an innovative, first of a kind, joint effort with Medtronic, IBM, and Pitango-Impact First, to establish the MindUp Incubator on Digital Health in early 2016 in Haifa. Today, in addition to continuing his work as an interventional cardiologist, Beyar continues President and Chairman roles at Rambam