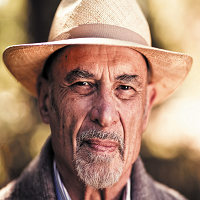 Irvin D. Yalom was born in Washington, D.C., on June 13, 1931, of parents who immigrated from Russia (from a small village named Celts near the Polish border) shortly after the first world war. The home was the inner city of Washington—a small apartment atop my parents’ grocery store on First and Seaton Street. During my childhood, Washington was a segregated city, and I lived in the midst of a poor, black neighborhood. Life on the streets was often perilous. Indoor reading was my refuge and, twice a week, I made the hazardous bicycle trek to the central library at Seventh and K streets to stock up on supplies.

No counseling or direction was available: my parents had virtually no secular education, never read books and were entirely consumed in the struggle for economic survival. My book choices were capricious, directed in part by the library architecture; the large, centrally placed bookcase on biography caught my attention early, and I spent an entire year going through that bookcase from A (John Adams) to Z (Zoroaster). But it was mainly in fiction where I found a refuge, an alternate, more satisfying world, a source of inspiration and wisdom. Sometime early in life, I developed the notion—one which I have never relinquished—that writing a novel is the very finest thing a person can do.