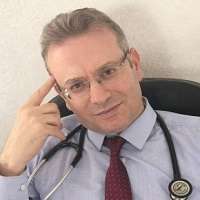 Prof. Hussam Ghoti is a Consultant of Internal Medicine, Hematology including Stem Cells Therapy.He gained his medical degree from FU-Berlin / Germany in 1996 and completed the practical year of medicine in England and Ireland.He succeeded with the outstanding performance his both specialties in Internal Medicine at Hadassah university hospital - Jerusalem (1999-2003) and in Hematology at Sackler university hospital inTel-Aviv (2003-2006 years). Prof. Ghoti served for the last 7 years (2006-2013) as a Senior Consultant of Hematology at Wolfson academic hospital. He was appointed in the period between 2013- 2016 as Chairman of Cancer Care Center and Stem Cell Therapy in Augusta Victoria Hospital in Jerusalem.

He also served as the head of Coagulation clinic and bleeding disorders at Assuta Medical Center in Tel Aviv (2016-2017).Prof. Ghoti was awarded many prizes form various academic institutions, including Sackler University, Israeli Medical Association and Wolfson Hospital for his outstanding research and professional performance. Dr. Ghoti has been involved in many research projects in the field of hematology. He has been studying the relationship between iron, oxidative stress, cell death, and cancer development. He wrote many important academic papers which became as many references in many conferences and educational material. Prof. Ghoti is the Chairman of the ECCT Center in Nicosia Cyprus, which deals with stem cell therapy and treating various types of cancer including refractory cases.