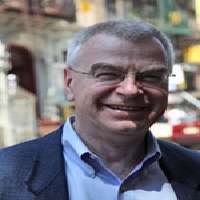 Gyorgy Buzsaki is Biggs Professor of Neuroscience at New York University. His primary interests are mechanisms of memory, sleep and associated diseases. The main focus of his work is “neural syntax,” i.e., how segmentation of neural information is organized by the numerous brain rhythms to support cognitive functions. Using technically innovative, multi-site recording probes in behaving animals, Buzsáki identified the cellular-synaptic basis of theta, gamma oscillations and sharp waves with associated fast oscillations, and explored how these patterns support cognitive functions, such as memory. The results of these wide ranging experiments are synthesized by his most influential work, the two-stage model of memory trace consolidation: the neocortex-mediated information processing during learning transiently modifies hippocampal networks, followed by reactivation and consolidation of these memory traces during later hippocampal sharp wave bursts. Buzsáki has also demonstrated that hippocampal and prefrontal cortical circuits can continuously generate self-organized assembly sequences to support memories and planning. Such internally generated sequences have long been thought to be the basis of cognitive functions. With more than 300 papers published on these topics, he is among the top 1% most-cited neuroscientists. Buzsáki sits on the editorial boards of several leading neuroscience journals, including Science and Neuron. He is a co-recipient of the 2011 Brain Prize.