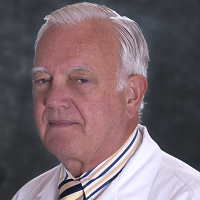 Dr. Glenn Morrison is retired from patient care, yet continues to play an active role in the education of University of Miami residents and fellows in the field of pediatric neurosurgery. Dr Glenn Morrison began practising neurological surgery in South Florida in 1974.

He was born in Philadelphia and moved to Cleveland 16 years later. After meeting his wife in High School and graduating from college he returned to medical school at Case Western Reserve during which time he spent time at Queen’s Square in London studying neurology. While a medical student he did steroid chemistry research under NIH auspices and made and reported a new discovery. After an internship, he spent two years doing NIH funded research on primates in the United States Public Health Service and then returned to University Hospitals, Cleveland Ohio for his Neurosurgical Residency.

Dr. Morrison then opened his practice of neurological surgery in South Florida by joining two well-established neurosurgeons. His practice flourished and he became involved with multiple hospitals and in the institutions of his speciality. He has served as the president of the Greater Miami Neurosurgical Society, the Florida Neurosurgical Society, the Southern Neurosurgical Society, the Greater Miami Chapter of the American College of Surgeons, and the Miami Medical Forum. He has served on, and chaired, multiple boards in several hospitals, but most notably Miami Children’s Hospital where he has severed as Chief of Neurosurgery, Chief of Surgery, Board of Directors, Medical Board, and most Hospital committees.