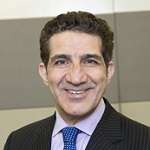 Farr R. Nezhat, MD, FACOG, FACS is a board-certified gynecologic oncologist and world-renowned authority in advanced laparoscopic and robotic surgery for the treatment of gynaecological cancers and complex benign conditions such as uterine fibroids, pelvic masses and severe and multi-organ endometriosis. He is a Professor in the Department of Obstetrics, Gynecology and Reproductive Science at Icahn School of Medicine at Mount Sinai and an Adjunct Professor at the State University of New York at Stony Brook, School of Medicine. He is the Director of the Division in Minimally Invasive Gynecologic Surgery and Robotics, Department of Obstetrics and Gynecology, Division of Gynecologic Oncology at Mount Sinai West. He is also the Director of Minimally Invasive Gynecologic Surgery in the Department of Obstetrics and Gynecology at Winthrop University Hospital. He and his brothers were pioneers in developing advanced laparoscopic surgical techniques and establishing evidence-based protocols for management and treatment of different pelvic disorders such as endometriosis, ovarian cysts and uterine myoma. Recognizing the impact of minimally invasive surgery in the treatment of gynecologic cancer, Dr Nezhat completed a fellowship in Gynecologic Oncology at Mount Sinai Medical Center, enabling him to continue his unwavering dedication to improving the outcomes for women with gynaecological malignancies. His main areas of interest and research include early detection and treatment of early and advanced ovarian cancer as well as cancer arising in endometriosis. He has been prolific in publishing his work on this and other subjects, authoring and co-authoring over 200 medical and scientific manuscripts and book chapters, and has lectured at national and international symposia. For years, he has directed a minimally-invasive surgery fellowship training program, helping young gynaecologists to become specially qualified to perform the new techniques.