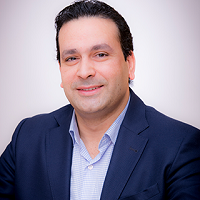 Dr. Essam M. Abdelalim obtained his B.Sc. degree in Veterinary Medicine in 1998 and his M.Sc. degree in Cytology and Histology in 2002 from the Suez Canal University (Egypt). He received his Ph.D. in Medical Science from Shiga University of Medical Science, Japan (2009), and was later appointed as Assistant Professor in the same university. After his Ph.D., he was appointed as Assistant Professor at the Suez Canal University and then he moved back to Japan, where he was awarded a Postdoctoral Fellowship from the Japan Society for Promotion of Science (JSPS) (2009- 2011). During that time, his research received funding from the JSPS to investigate the roles of natriuretic peptides and p53 in the regulation of self-renewal, pluripotency, and differentiation of embryonic stem cells (ESCs). In 2014, he was promoted to the position of Associate Professor of Cytology & Histology at the Suez Canal University (in leave of absence).

In 2013, he joined the Qatar Biomedical Research Institute (QBRI) as a Research Fellow and was later promoted to a Scientist (2014). In 2015, Dr. Abdelalim joined Hamad Bin Khalifa University (HBKU), where he holds a joint appointment as an Assistant Professor at the College of Science and Engineering (CSE) and as a faculty in the division of Biological and Biomedical Sciences. Dr. Abdelalim has received several prestigious awards, including the State Prize of Encouragement (Egypt) in 2012 and the President’s Award for outstanding Ph.D. students from Shiga University of Medical Science (Japan) in 2007. Dr. Abdelalim is a member of the editorial board of Stem Cells and Development and Frontiers in Cell and Developmental Biology and serves as a reviewer for several international journals and funding agencies.