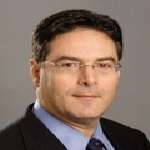 Dr. Hollander is a Clinical Professor of Psychiatry and Behavioral Sciences at the Albert Einstein College of Medicine and Director of the Autism and Obsessive Compulsive Spectrum Program at Montefiore Medical Center and the Albert Einstein College of Medicine. Previously he served as the Esther and Joseph Klingenstein Professor and Chair of Psychiatry at the Mount Sinai School of Medicine and was Director of the Seaver and NY Autism Center of Excellence in New York City. Before then he served as Associate Professor of Clinical Psychiatry at the Columbia University College of Physicians and Surgeons in New York.

Dr. Hollander received his B.A. from Brandeis University (1978), and his M.D. from SUNY Downstate Medical College, Brooklyn (1982). He completed his internship in Internal Medicine at Mt. Sinai Hospital (1983), residency and chief resident in psychiatry at Mt Sinai School of Medicine (1986), and his NIMH research fellowship at Columbia University College of Physicians and Surgeons (1988). He has served as an Associate Professor of Clinical Psychiatry at Columbia University College of Physicians and Surgeons, and as the Esther and Joseph Klingenstein Professor and Chair of Psychiatry at the Mount Sinai School of Medicine.

Dr. Hollander has served as the principal investigator for a number of federal grants, including the NIH Greater New York Autism Center of Excellence, the NIMH Research Training Grant in Psychopharmacology and Outcomes Research, and an FDA funded multicenter treatment trial of pediatric body dysmorphic disorder. He was the principal investigator of the autism Clinical Trials Network, and Chair of the eight centers NIH STAART Autism Steering Committee. He is involved in research on the neuropharmacology, neuropsychiatry, functional imaging, and treatment of obsessive-compulsive disorder, impulsive/aggressive personality disorders, obsessive-compulsive-related disorders such as body dysmorphic disorder, pathological gambling, and autism. Dr. Hollander served as Chair of the DSM-V Research Planning Agenda for Obsessive Compulsive Behavior Spectrum Disorders, and member of the DSM-V Anxiety, Obsessive-Compulsive Spectrum, Post-Traumatic and Dissociative Disorders Workgroup, and the Behavioral and Substance Addictions Workgroup.