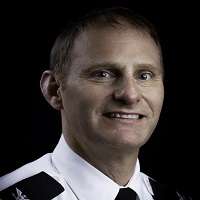 Dr Benedek is Professor of Psychiatry and Chairman of the Uniformed Services University's Department of Psychiatry appointed in 2017. He is also an Associate Director of the University's Center for the Study of Traumatic Stress. He is a Past President of the Society of Uniformed Service Psychiatrists-the Military District Branch of the American Psychiatric Association, and he is the currently the Society's Deputy Representative to the APA Assembly. He is a Distinguished Fellow of the American Psychiatric Association.

He received his B.A. from the University of Virginia in 1986 and his M.D. from the Uniformed Services University School of medicine in 1991. After Internship and Residency in Psychiatry at Walter Reed Army Medical Center, he was assigned as Division Psychiatrist, First Armor Division, Germany. In 1999 he became Chief, Forensic Psychiatry Service, and Director, National Capital Consortium Military Forensic Psychiatry Fellowship Program at Walter Reed, and he remained in those positions until joining the USUHS/CSTS faculty in 2004.

He awards include the Meritorious Service (20LC) and Army Commendation (3OLC) Medals for his work at Walter Reed and in Bosnia, the LTG Claire Chennault Award for Outstanding Military Psychiatry Faculty Member, and the American Psychiatric Association’s Nancy C.A. Roeske Award for Excellence in Medical Student Education. In 2002 he received the U.S. Army Surgeon General’s “A” Proficiency Designator.

He served on the American Psychiatric Association's Committee on Confidentiality, was a consultant to the Association's Practice Guideline for the treatment of Acute Stress Disorder and Posttraumatic Stress Disorder work-group in the development of its 2004 practice guideline, and lead author of the 2009 guideline watch (update). He is co-editor the recently published Clinical Manual for Management of PTSD.