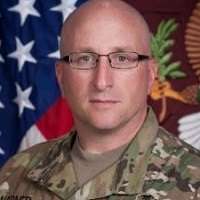 Warner is currently a Student and Class President at the National War College in Washington, DC. He is a graduate of the U.S. Military Academy and Uniformed Services University of the Health Sciences. He completed his residency training in Family Practice and Psychiatry at Walter Reed Army Medical Center where he was named the General Graves B. Erskine Award winner. COL Warner has commanded Winn Army Community Hospital at Fort Stewart, Georgia, and the 61st Multifunctional Medical Battalion at Fort Hood, Texas. He served as the Consultant to The US Army Surgeon General for Psychiatry from 2012 to 2018. COL

Warner has deployed twice in support of Operation Iraqi Freedom, where he was noted for his efforts in pushing behavioral health care forward to maneuver units and was named a recipient of the 2006 Surgeon General’s Physician Recognition Award. COL Warner has published two books on military mental health and primarily authored more than forty articles including recent entries in the American Journal of Psychiatry, the Annals of Psychiatry, and Lancet. His service and achievement have led to his selection to the Order of Military Medical Merit and the Army A Designator. Additionally, COL Warner is on the editorial board of Academic Psychiatry and the American College of Psychiatrists.