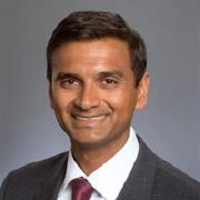 Dr. Anshul M. Patel was born in London, England and moved to New York as a young child. He was raised in the Bronx and then in Roslyn, Long Island. He did his undergraduate studies at Harvard University graduating magna cum laude and Phi Beta Kappa with a degree in biochemical sciences. He went on to medical school at Johns Hopkins University graduating as a member of the Alpha Omega Alpha honor society. He returned to Boston and Harvard Medical School to complete his internship and residency in Internal Medicine at Massachusetts General Hospital. He was selected to stay on at MGH to finish two additional fellowships in Cardiology and Cardiac Electrophysiology. As a cardiac electrophysiologist, he specializes in the treatment of heart rhythm disorders.

He has been practicing cardiology and cardiac electrophysiology at Emory Saint Joseph’s Hospital since 2008. He brought innovative techniques in catheter ablation for heart arrhythmias including epicardial access, mechanical support assisted ablation, and zero fluoroscopy procedures to the hospital’s electrophysiology service. He has a particular interest in complex ablations for atrial fibrillation and ventricular tachycardia.

Dr. Patel performs all manner of device implantation including pacemakers, implantable cardioverter defibrillators, and cardiac resynchronization devices. He has been involved in newer device implantation studies including leadless pacemakers and subcutaneous defibrillators. He also performs mechanical and laser lead extraction. In addition, he has been an active implanter of left atrial appendage occlusion devices including the Watchman and Lariat as an alternative to blood thinners for patients with atrial fibrillation.