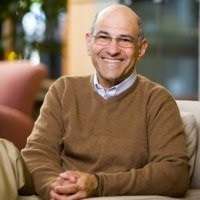 Andrew Schorr of Seattle is a medical journalist who was diagnosed with chronic lymphocytic leukemia in 1996. By participating in a clinical trial he has enjoyed a deep and lasting remission which has enabled him to be a pioneer in providing authoritative medical information online for other people facing serious illness. As a passionate patient-advocate, and with support from many of America's leading medical centers, Andrew has hosted and helped produce several thousand webcasts and videos for patients who have cancer or a wide range of chronic and acute medical concerns.
Andrew has a long history in journalism. He has journalism degrees from the University of North Carolina and Columbia University and worked in television at WBTV in Charlotte and as a national producer of the groundbreaking reality television program "PM/Evening Magazine." In 1984 he began to devote himself to producing medical programs and, in partnership with his wife, Esther, won several national awards for their efforts. In 1992 Andrew developed "HealthTalk," interactive "talk shows" for patients. These were first available as live events via toll free telephone lines and later additionally online and at in-person town meetings. Andrew invented this approach and eventually received several million dollars in venture capital to help HealthTalk grow. In 2009, HealthTalk became part of Waterfront Media's EverydayHealth.com.
In 2005, Andrew left HealthTalk to found Patient Power LLC, first as a weekly radio show for patients and soon thereafter as a growing website and producer of syndicated medical talk shows nationwide. Andrew hosts nearly every program. Many of the nation's leading medical centers have supported Patient Power either financially or by donating medical experts time for programs. Increasingly medical products companies, with no strings attached, have approached Andrew to support his efforts at patient empowerment. In 2009, Andrew joined with like-minded patient advocates to form the non-profit Patient Empowerment Network.