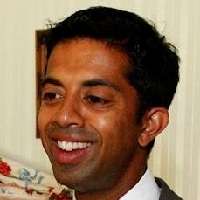 Ajan Reginald was born in Kandy, Sri Lanka. When Ajan was five his family emigrated to England because Ajan’s father got a job as a doctor in NHS. His father is a Medical school lecturer (Warwick Uni) and his mother is a clinical psychotherapist. The family settled in Coventry and Ajan first gained entrance to King Henry School and then won a scholarship to Rugby School. For University he studied Dental Surgeon at University of London and graduated in 1996. During school and University Ajan played hockey in England, Holland, and Germany including England Premier National League. While playing hockey Ajan suffered a significant visual injury that led him to voluntarily retire from dentistry in 2002. Unfortunately, before being diagnosed, he had unwittingly made clinical errors and he lost his dental license in 2005. (See Ajan Reginald Dentist). After retiring from Dentistry, Ajan started to re-train in Business and Management and was awarded the UK Fulbright Scholarship in 2002. He graduated with an MBA from Kellogg Business school, Northwestern University in 2004 having won the Biotechnology Scholarship. He joined Boston Consulting Group (BCG) as a summer intern in 2003 and continued to work part-time through Business school to fund his education. At BCG, Ajan specialized in Pharmaceuticals and Intellectual property development working across the US and Europe. His last client was Roche Pharmaceuticals based in Basel who asked Ajan to join in the Partnering (Licensing) division. As a deal-making Ajan excelled culminating with winning the Roche Gold Olympiad in 2007. He was then promoted to become Global Head of Emerging Technologies for Roche Group Research with the remit to identify the most important new medicines including stem cells and other breakthrough technologies. After ~5 years of retraining, Ajan also started the slow process of playing hockey again and started to coach junior players. He won European qualification with GH Zurich and the forelands leaguer in Germany. In 2007, Prof. Sir Martin Evans and Ajan both spoke at a conference in Hyderabad and started a friendship that led to their founding Cell Therapy Ltd (CTL) together in 2009.