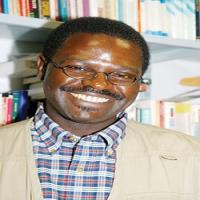 Prof. Francis B. Nyamnjoh is Professor of Social Anthropology at the University of Cape Town since August 2009 and holds a BA (1984) and MA (1985) degrees from the University of Yaounde, Cameroon, and a PhD (1990) from the University of Leicester, UK. Prior to 2009 he served as Head of Publications of the Council for the Development of Social Science Research in Africa (CODESRIA) from July 2003 to July 2009. He has taught sociology, anthropology and communication studies at universities in Cameroon and Botswana, and has researched and written extensively on Cameroon and Botswana, where he was awarded the "Senior Arts Researcher of the Year" prize for 2003. In October 2012 he received a University of Cape Town Excellence Award for "Exceptional Contribution as a Professor in the Faculty of Humanities". He is recipient of the "ASU African Hero 2013" annual award by the African Students Union, Ohio University, USA, and of the 2014 Eko Prize for African Literature. He is a B2 rated Professor and Researcher by the South African National Research Foundation (NRF) since 2010, a Fellow of the Cameroon Academy of Science since August 2011, a Fellow of the African Academy of Science since December 2014, and Chair of the Editorial Board of the South African Human Sciences Research Council (HSRC) Press since January 2011