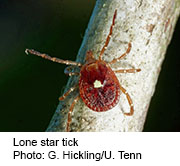 Tick-Caused Meat Allergy on the Rise in the United States

FRIDAY, July 6, 2018 (HealthDay News) -- Red meat allergy caused by a bite from the lone star tick appears to be on the rise in the United States, a researcher says.

More than 5,000 cases have been reported in the United States, up from 3,500 two years ago, according to Tara Narula, M.D., of the University of North Carolina at Chapel Hill, CBS News reported. The lone star tick is most common in the South, but is also found in much of the eastern United States. The ticks may be spreading to new areas as temperatures rise, research suggests.

Hives, skin rash, stomach problems, headaches, and trouble breathing are among the symptoms of the meat allergy. There is no treatment or cure. The only way to prevent symptoms is to avoid red meat, CBS News reported.

Physicians should urge their patients to do tick checks. When they come in from the outdoors, they should take a shower, put their clothes in the dryer on high-heat for 10 minutes, avoid high grassy areas, stay on trails, and treat their dogs.