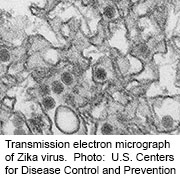 FRIDAY, Sept. 29, 2017 (HealthDay News) -- A single mutation in the Zika virus made it more virulent, contributing to the increased incidence of microcephaly, according to a study published online Sept. 28 in Science.

Ling Yuan, Ph.D., from the Chinese Academy of Sciences in Beijing, and colleagues conducted phylogenetic analysis on contemporary epidemic strains of the Zika virus.

The researchers found that a single serine to glutamin substitution (S139N) in the viral polyprotein substantially increased Zika virus infectivity in both human and mouse neural progenitor cells. This led to more significant microcephaly in mice fetuses as well as higher neonatal mouse mortality. This single S139N substitution arose before the outbreak in French Polynesia in 2013 and has been maintained during the subsequent spread to the Americas, according to evolutionary analyses.