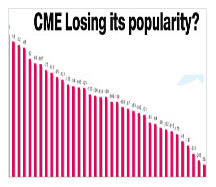 Is Online CME Losing its popularity?

The ACCME (The Accreditation Council for Continuing Medical Education) has released its 2012 Annual Report on July 25, 2013. There were 133,620 educational activities with 0.9 million hours of educational instructions in 2012 provided by 2000 CME providers. Our statisticians at eMedEvents.com have created a table outlining the online CME activities tracing back to 2008 and in historical comparison to 2002. from the data set, interest in Internet based CME activities is leveling off with a peak in 2009. Not only there’s decline in total internet based activities but its share of the total activities has declined to 21.8%. There are multiple factors that account for the decline, like lack of interaction, poor quality of the content, dearth of networking opportunities and possibly increased commercial support of internet based CME activities. As the novelty wore off, Physicians preferring to maintain a balance between their offline and online activities. Mr. Kollu, Managing director of eMedEvents believes this is due to excessive fragmentation of providers with many hundreds of portals providing online CME activities which makes it difficult to access the right course, poor grading systems and variable cost structures. He advises for a well designed platform would improve participation like Kayak for flights.

There is also evidence of declining commercial support for CME activities by Pharmaceutical industry due to recent legislative actions curbing the incentives. It accounted for 28% of income support and only 18% of CME activities received them in 2012. There is evidence that this is having a huge impact on the CME providers as their numbers have declined from a peak of 2413 to 2000 in 2012. It’s too early to say what impact Sunshine act will have on the industry, but its fair to guess with the increased focus in the media led by Propublica's Dollars for Docs, it will decline..