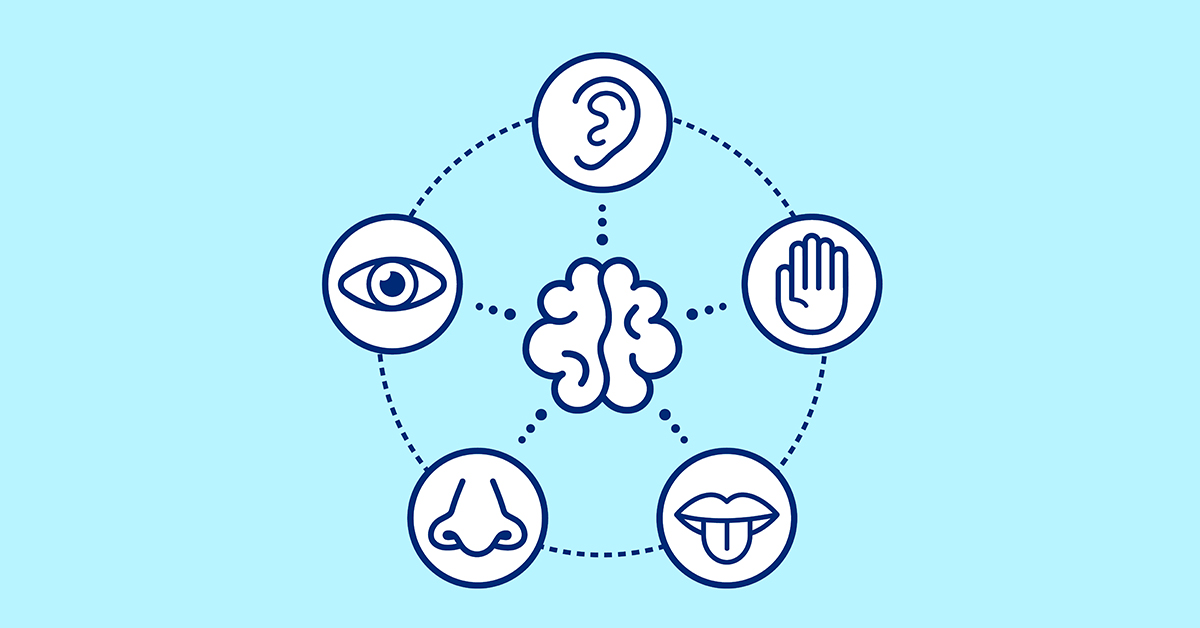 Ask anyone to list out the five senses, and they will say “taste, smell, touch, hearing and sight.” The public opinion classifies these as the general human senses, but physiologically speaking, they are considered ‘special’ senses; they have a specific organ dedicated to each sense. That’s why researchers mainly focus on the eye, inner ear, tongue and nose to analyze sight, hearing, taste and smell, respectively. On the other hand, touch is classified as a ‘general’ sense; it is distributed throughout the body and has receptor cells within other organ structures, so researchers have to analyze the receptor type to understand its role in the grand ‘schema’ of ‘touch.’

Almost all current studies happening right now are directed towards alleviating COVID-19, but some focus on the realm of sensory processing. We present you with an assortment of computing, molecular, cellular and microscopy findings and inventions; a 5-course meal, if you will, each catered to a ‘special’ sense; conducted in the field of neuroscience in 2020-2021.

The mechanism of how Somatosensorial touch signals from each type of receptor are processed and expressed has perplexed scientists for generations. Specifically, whether the brain individually processes each stimulus or stimuli interact with each other before reaching conscious perception.

The Scientists at the University College London (UCL) tried solving this puzzle with Schezuan pepper, a cooking spice. The UCL team applied hydroxy-α-sanshool, the bioactive compound in Schezuan pepper that causes a tingling sensation, to a small area on the lip and asked the study participants to note the intensity of the sensation. Next, they applied stead pressure to different loci on the upper and lower lips and asked them to rate the same tingling sensation after pressure was applied. Several trials showed that the effect caused by hydroxy-α-sanshool reduced when steady pressure was increased and further decreased when pressure loci drew closer to the site where the chemical was present.

By chemically stimulating one type of touch receptor, associated with fluttery vibrations, and mechanically stimulating another receptor associated with steady pressure perception, they revealed that there is, in fact, an inhibitory interaction between different mechanoreceptor channels.1 This confirmation disproves the classical theory that each mechanoreceptor independently carries and preserves tactile information till early cortical somatosensory processing.

“Scientists had previously described how 'touch inhibits pain,’ but our work provides novel evidence that one kind of touch can inhibit another kind of touch. Our results suggest that the touch system for steady pressure must inhibit the touch system for fluttery vibration at some level in the nervous system. The inhibition between these signals may explain how the brain produces a single perception of touch, despite the wide range of signals transmitted by the different types of sensory receptors in the skin,"2 stated Professor Patrick Haggard, the study’s author, from the UCL Institute of Cognitive Neuroscience.

The sense of sight is crucial from any point of view, evolutionary or otherwise. Scientists from Australia have invented a cortical vision prosthetic to restore limited sight in the clinically blind. The Gennaris bionic vision system, the first of its kind, has already been implanted in some patients and is being prepared for human clinical trials, following a successful long-term pre-clinical trial in sheep. Researchers also conducted a histological study on sheep to identify potential immunological responses. They found that the brain tolerated the device and implantation procedure well.3

Gennaris carries out the function of healthy optic nerves and can be implanted intracranially using subdural or intracortical microelectrodes to stimulate neurons within the visual cortex electrically. Each device comprises custom headgear with an inbuilt camera, a wireless transmitter, a vision processing unit and software, and a series of 9x9 ceramic tiles with 43 microelectrodes for implantation into the brain. 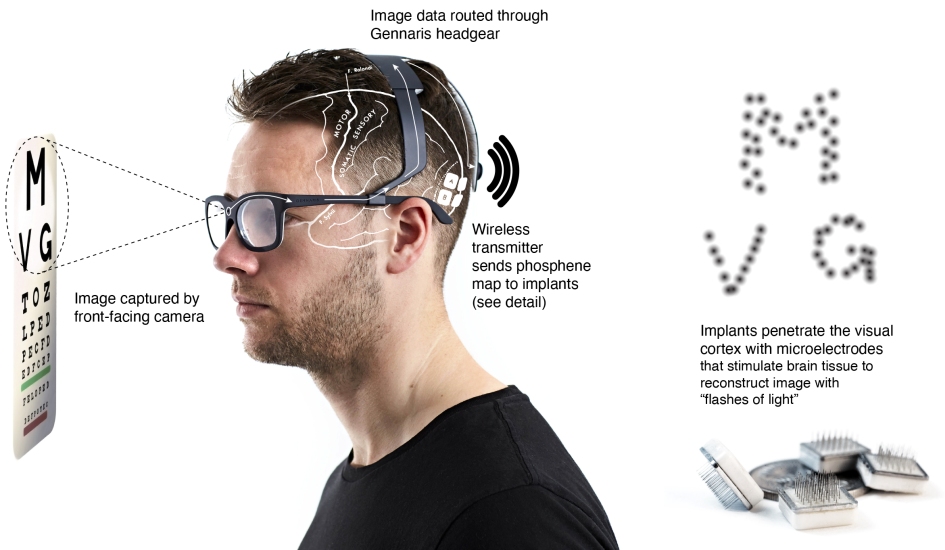 Any visual information captured by the video camera is sent to the vision processor, which extracts the most useful visual information and wirelessly transmits it to the complex circuitry within each implanted tile. The microcircuitry then converts the data into a pattern of electrical pulses and transfers them to the visual cortex via the microelectrode array. This stimulation will create a ‘light’ that the wearer will ‘see.’

Currently, Gennaris can transmit combinations of up to 473 spots of light, called phosphenes (detail), which provides enough information for the user to navigate indoor and outdoor environments and establish the presence of people and objects around them.

The pioneering technology can revolutionize the treatment of neurological diseases and brain injury. You could potentially monitor a patient’s cortical state, examine electrical abnormalities and deliver tailored electrical pulses to restore brain function. The device’s ability to act as an alternate for the optic nerve opens up the possibility of neuron substitution to revive or mend vital senses beyond vision.

The molecular intricacy of the inner ear is nothing less than “an engineering marvel.”4 Andrew Griffith and his team spent over two decades trying to unravel the molecular mechanics of the Organ of Corti (a primary structure in the cochlea). They investigated the role of TMC1 (Transmembrane Channel Like 1) and TMC2 (Transmembrane Channel Like 2) proteins in sensory transduction in auditory and vestibular hair cells within the inner ear. Mutations in TMC1 lead to progressive post-lingual hearing loss and profound prelingual deafness,5 while mutations in TMC2 may underlie hereditary diseases such as hearing and balance.6 The researchers recorded whole-cell and single-channel ion currents in cells that expressed TMC1, TMC2 and a mutant TMC1 and found that TMC2 expressing cells had high calcium permeability and large single-channel currents, TMC1 had reduced calcium permeability and single-channel currents, and the mutant exhibited a broad range of single-channel currents, suggesting multiple heteromeric combinations of TMC subunits.7 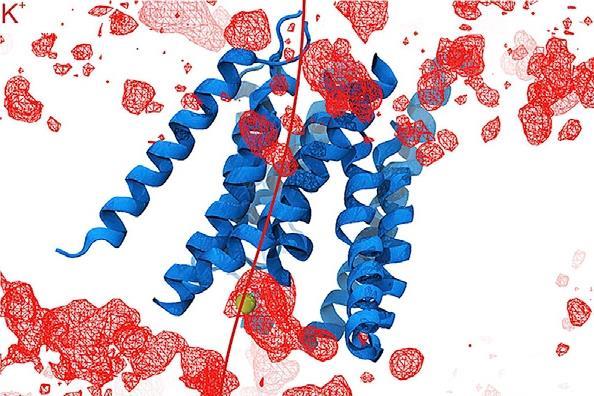 Their research highlighted a treasure trove of neurogenetic jewels; TMC1 and TMC2 genes may functionally compensate for each other in inner ear functions, encode for two different calcium permeability membrane proteins, and have distinct biophysical properties. Drs. Jeffrey Holt, Andrew Griffith, and Gwenaelle Geleoc won the 2021 Pioneer in Basic Science Award for their remarkable breakthrough research4 and rightly so. Identifying the mechanics of processing sound, something that travels faster than a conducting nerve cell is no small feat.

The team uncovered valuable information that could help us edit, alter, inhibit, and circumvent the TMC paralogs, and concurrently providing an almost omnipotent ability to control sound perception. Auditory restoration could become a simple “snip and stick.” In a groundbreaking experiment, scientists invented a viral vector to deliver corrective DNA into the inner ear. Dr. Jeffrey Holt, from Boston Children’s Hospital, said: “This is a landmark study. Here we show, for the first time, that by delivering the correct gene sequence to a large number of sensory cells in the ear, we can restore both hearing and balance to near-normal levels.”4

Dr. Gwenaelle Geleoc, the lead researcher of the study, left off by saying, “Now, you can whisper, and they can hear you.”11

Unlike light or sound, where experimenters can control independent variables by tweaking frequency and wavelength, it is challenging to study odor and its neural representations. Often, even small elemental changes, the addition of few carbon or oxygen atoms, can result in drastic differences in smell perception. Neurobiologists at Harvard Medical School accepted this challenge. They managed to study odor processing and identified how the olfactory cortex maps similar odors, which could help us understand and potentially control the sense of smell.

Pashkovski et al. investigated how different odor chemical analogs are processed in the olfactory bulb, the initial odor processing structure in the forebrain, and the piriform cortex, the main structure for comprehensive processing of odors. First, they categorized thousands of odor molecules into three groups: High diversity, intermediate diversity (odors divided into related clusters) and low diversity (molecules have only structural variation in carbon- chain lengths), based on molecular weight, electrochemical properties, atomic weight and so on. They then exposed mice to various combinations of odors from each set and recorded image patterns of neural activity in the piriform cortex and olfactory bulb using multiphoton microscopy. The experiments found that related odor chemistry was mirrored by neural activity in both the piriform cortex and olfactory bulb. In contrast, weakly related odors produced weakly connected activity patterns.

"The plasticity of the cortex may help explain why smell is on one hand invariant between individuals, and yet customizable depending on our unique experiences," stated Sandeep Robert Datta, the senior study author and associate professor of neurobiology in the Blavatnik Institute at Harvard Medical School.9

The human brain is ‘hard-wired’ – it requires no prior experience or learning when it comes to taste. If something tastes bitter, we stay away from it, and when something tastes sweet, we tend to partake in it proactively. Nevertheless, these innate responses can be altered by external or internal states, as revealed by Jin et al. The team discovered a neural mechanism by which the cortex exerts top-down control over innate taste responses in mice.10

Jin et al. examined, identified and characterized neurons in the brainstem that transmit sweet and bitter signals from the tongue to the cortex. Through the expression of genetically encoded activity reporters in the rostral nucleus of the solitary tract (rNST), they discovered that that somatostatin (Sst) and calbindin-2 (Calb2) respond selectively to bitter and sweet tastants, respectively. When the researchers surgically removed Sst-encoding neurons in mice, no aversion to bitter stimuli was observed. Inversely, when they removed Calb-2-encoding neurons, the sweet tastants no longer attracted the mice.10

Furthermore, the study found that attraction to the sweet chemicals is reduced when both sweet and bitter stimuli are present, showing that the bitter taste pathway can alter activity in the sweet taste pathway. Participation of peripheral neurons in modulation was not detected, further proving that combined positive and negative feedback pathways from the cortex to the rNST neurons enhance aversive responses to bitter tastants while suppressing appetitive responses associated with any sweet tastants.10

The discovery of the rNST neurons and their crucial role in processing bitter and sweet tastes illuminates a possible cross-modulation site between the two pathways. In turn, it grants us an essential ability, one which could modify the evolutionarily acquired innate behavior.

All in all, last year was shadowed by COVID-19 misfortune but the advances made in science pierced through the storm cloud. I’d say that’s a good reason to sit back, relax and appreciate the pleasant sights, tastes, touches, smells and sounds of the world.