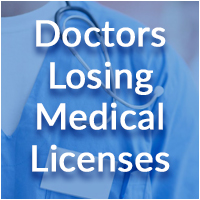 A physician’s worst nightmare may be losing his/her medical license. Unfortunately, a number of doctors end up losing their medical licenses due to a variety of reasons. The Federation of State Medical Boards (FSMB) represents 70 state medical and osteopathic regulatory boards of the United States. It is a national non-profit organization that investigates complaints filed against physicians, implements disciplinary actions, and conducts evaluation and rehabilitation of physicians. Its mission includes advocating for and promoting patient safety, quality health care, and regulatory best practices.

Spending more than 7+ years in education and perhaps nearly $1 million to attain a medical degree, and then attending several medical conferences to establish a reputable career is a significant investment. Any accusations against a doctor or other healthcare provider can severally hamper his practice and ability to work in the medical field in the future. Each state board has the authority to discipline and scrutinize a doctor’s practice based on complaints. Depending on the findings of an investigation, punishment may include probation or a license may be revoked along with other charges.

A medical practitioner can be disciplined based on many reasons including:

Despite severe consequences taken by the medical boards and the courts, some doctors still choose to be involved in inappropriate activities.

One way to lose a license is if a doctor is involved in any kind of kickbacks from various companies, such as pharmaceutical companies or physician-owned companies.

Doctors are also prone to various kinds of disciplinary actions if they have anger issues, substance addiction, and mental health conditions. Despite knowing that a medical practitioner faces a high amount of stress, nearly 40 percent of doctors avoid mental health care due to fear of experiencing professional discrimination and medical license cancellation. This is an unfortunate side effect of this scrutiny. State medical boards often require doctors to disclose their mental health history.

In recent years, doctors who have refused to adapt to technologies, stay updated on recent medical trends, improve their practicing strategies and prescribing practices, perform inaccurate medical decision making, and do not attend the required CME medical conferences have faced disciplinary actions or lost their licenses.

Some of the most recent and notorious cases have made news for their egregious actions.

Lawrence Gerard Nassar: Larry Nassar was the renowned USA Gymnastics national team doctor and an osteopathic physician at Michigan State University. He was convicted as a serial child molester. His medical license was permanently revoked and he was fined $1 million. He is currently serving a 60-year federal sentence for his crimes.

Jacques Roy: This former Texas doctor was recently sentenced to 35 years in prison for committing $373 million home health fraud scam against Medicare and Medicaid. He also had a history of medical malpractice complaints and disciplinary action related to his medical practice. His scam is considered to be the largest in-home healthcare fraud in the United States.

Roberto A. Fernandez: This Miami-based doctor was charged with the illegal distribution of highly addictive drugs, such as Oxycodone, in return for kickbacks from various pharmaceutical companies. He is facing 16 counts including a $20 million Medicare and Medicaid fraud.

Elizabeth Wettlaufer: A former Canadian registered nurse turned serial killer, confessed to killing 8 senior citizens in her care by injecting them with insulin and attempting to murder 6 others in Southwestern Ontario. She was sentenced to life in prison and her nursing license was revoked.

Anna Konopka: This 85-year-old doctor in New Hampshire surrendered her license and has not been able to practice for issues regarding record keeping, prescribing practices, and medical decision-making. She refuses to use a computer, keeping all records by hand, and so has not been compliant with the state law for drug monitoring to reduce opioid overuse.

Stringent disciplinary actions towards these doctors and others have become a high-profile issue and have sparked a debate across the nation about oversight and patient safety. This makes the work of the FSMB and other regulatory boards all the more important.