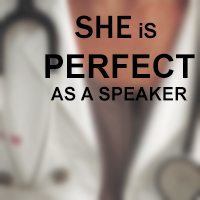 Can We Get More Women Speakers at Medical Conferences?

Medical conferences are a great place to network with other healthcare professionals, earn CME credits, update your skills, and see the newest trends in medical equipment. They are also a chance to present your research and share your knowledge as a speaker. However, medical conferences are not immune to an issue that has permeated the conference culture: gender inequality and gender bias. Since so many opportunities are given at a medical conference, it is crucial that they not be biased against women. Increasing the number of healthcare speakers at these conferences is an important step. So how do we start to solve this problem?

Arturo Casadevall and Jo Handelsman observed that despite the growing number of women in scientific careers, they remain underrepresented as conference speakers. This led them to conduct a study which showed that one way to improve on this bias is to add more women to the conference convening or organizing team. Their study revealed that “having at least one women member of the convening team correlated with a significantly higher proportion of invited female speakers and reduce the likelihood of an all-male symposium roster.” (Casadevall, Handelsman 2014)

Another way scientists around the world are working together to address gender bias at conferences is through social media. One example of how they have made a difference was in 2014. More than 1500 scientists signed a petition at Change.org after seeing that the organizers of the 15th International Congress of Quantum Chemistry filled their roster of speakers, chairs, and honorary chairs with only males. The petition urged a boycott and the organizers responded by including six women on their new list of speakers. This issue is common among all kinds of conferences, summits, and gatherings, not just scientific. Another group of activists created the All Male Panel Tumblr page to call out gender bias and bring attention to the continued underrepresentation of women in many events. (Arnold, 2015)

Diversity is necessary for a collaborative group of professionals discussing healthcare with the ultimate goal of improving the lives of their diverse group of patients. One way we must improve is for more women to speak at medical conferences. This one change can attract more women attendees, improve the career and networking opportunities for women in healthcare through these conferences, and can even attract more women to the field.